John McKay – Why Use Cork Leather? 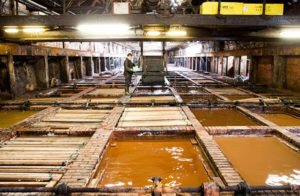 The production of animal leather is an extraordinarily polluting industry, having a huge negative impact on the environment. Chromium salts, phenolics, tannins, formaldehyde, ammonida, coal-tar derivatives, oils, dyes, finishes (some cyanide based), organic matter such as fat, nails and hair are among products that are constantly released to the environment in tannery wastewater.

This leads to the poisoning of the aquatic life, which might be consumed, but the water is often also used for irrigation and will at some stage enter drinking supplies.

India and China produce vast quantities of animal leather but dealing with pollution is often not a priority. Kanpur in northern India is a fine example and is famous for two things; one is the enormous output of animal leather, the other is that it is one of the most polluted cities in the world with tannery waste being exhausted into the Ganga River.  In India there are more than 2000 tanneries employing around 2 million people. Most factories utilise chrome tanning and to process 100 Kg of raw hide it requires 500 Kg of chemicals and can result in 50 cubic metres of wastewater.

The tannery workers (and local residents) are in many cases constantly exposed to the processes, often with little safety equipment.  Sometimes they are knee-deep in the vats of toxic chemicals.  Many die of cancer likely caused by this exposure and studies in Italy and Sweden found that tannery workers had lung cancer risks between 20% to 50% above expected levels.  This is likely due to arsenic exposure which has long been associated with the disease.  In the USA the Centre for Disease Control and Prevention found that residents living near to a Kentucky tannery were five times more likely to contract leukaemia than the US average.

Brazil is another significant exporter of finished animal hide and huge areas of rainforest have been cleared to convert the land to grazing and crop production for feed.  In the last 50 years a staggering 70% of the Amazon rainforest has disappeared for this purpose and has resulted in the loss of habitat for millions of species, it has destroyed trees that could hold the cure too many diseases and of course has had a significant effect on climate change. There has been much publicity in regard to the effects of methane produced by livestock but the animal waste is also an extraordinarily big issue as animals on factory farms produce 130 times more excrement as the entire human population without the sewage plants to deal with it.

These were among the reasons we set up a company to sell finished cork leather products. No harmful chemicals are used in the production of cork leather and as the bark re-grows it can be repeatedly harvested for the life of the tree. The positive effects on the environment are further enhanced as a stripped tree can absorb up to five times as much CO2 as one with intact bark, thus making it a truly sustainable and cruelty-free material. 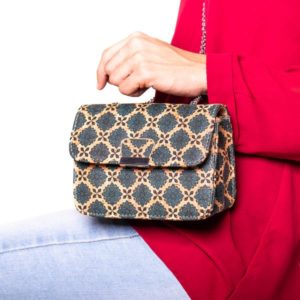 As a family of vegetarians and vegans we have always made conscious decisions about the role of animals in our lives – from our plates to our clothes. It was only when holidaying on the island of Madeira (Portugal) that we came across items made from cork leather and began to realise the amazing versatility and numerous applications of the cork material. We bought ourselves a few items and, upon returning home, were quickly struck by how few of our friends knew about cork leather. Most can see the significant benefits when they’re explained to them, we love the fact that it is vegan and so eco-friendly as it can be repeatedly harvested from the same tree.

Not something you can do with a cow!